Mazgani and his band will depart this week for a mini-tour around Western Europe, with dates in Spain, France and the Netherlands. The Song of Distance tour will then return to Portugal for a very special date in Lisbon at Teatro Aberto, March 11th. 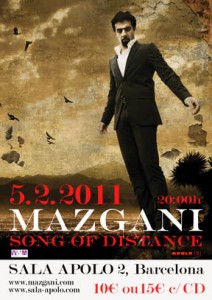 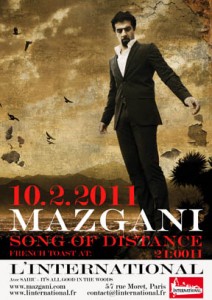 This string of dates will kick off in Barcelona at Sala 2 de Apolo on February 5th, and include a return engagement at Amsterdam’s Paradiso before Mazgani’s very first Paris showcase, as part of the French Toast soiree at L’International. Heralding the tour was a review of Song of Distance in French Magazine Les Inrockuptibles.

Mazgani plays live on a new show on Portuguese TV, Toca e Foge, a production from Canal Q. Please check out the performances, and many thanks to Canal Q for a great show. Keep up the initiative!

Mazgani’s new single, Beggar’s Hands, was offered on October 18th as a free download to Mazgani.com’s newsletter subscribers, featuring Mercy as its b-side. Both tracks are re-recordings of the album versions found on “Song of Distance”, and feature Mazgani’s full band of merry men.

On the 25th of October, Mazgani’s Song of Distance was released in the UK via AWAL… you can now download the single via MusicGlue.

Visit the shows page for upcoming gigs in Portugal, and soon to be announced, Spain and Belgium! 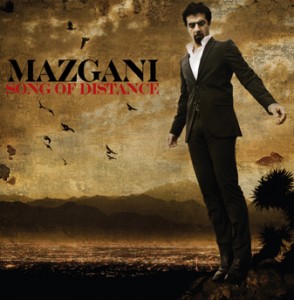 Welcome back to Mazgani.com. We will be re-opening our site soon using WordPress. Thank you all for joining us on the old Joomla CMS, we look forward to meeting online here once again, when all is up and running. Meanwhile please visit our Facebook.

Dust in the Sun live on Top+